It was time for a bit of departure from cycling. My mind said so, my heart said so and most importantly, my bank account. After South Korea (post to come…sometime) I felt like I needed a break. While I enjoyed my time there, I was starting to feel a bit jaded from travelling.  I had planned to join my friends Marcus and Kirsty in Japan, but I soon realized that I needed to work sooner rather than later. So, I booked a ticket to Melbourne where I spent a lovely few days with my host, Janet. Then, by train and bicycle  I made my way North to Mildura, where I would be planting trees for Outland Resources at six Australian cents per tree. I was planting about 4000-50o0 trees per day to reforest areas of Murray Sunset National Park. After two weeks, we moved to Oberon in New South Wales where we were paid twelve cents and luckily I only had to bend over half as much. This wasn’t my first rodeo – I worked as a planter for six seasons in Canada. It is a grueling job that I both loved and hated. It has challenged me mentally and physically in ways that nothing else ever has and probably nothing else ever will. 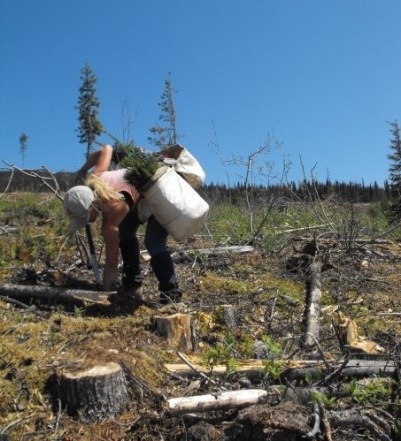 To get an idea of what tree planting is all about (in Canada) I recommend my friend and co-worker Tara’s excellent article, who is now a reporter for New York’s Epoch Times newspaper.

I swore to myself that I would never do this job again. But, here I was, back at it Australia and I have absolutely no regrets for making that decision. I lived and worked with an incredible crew of people and it felt good to be back in the game.

In the zone: Oberon, NSW 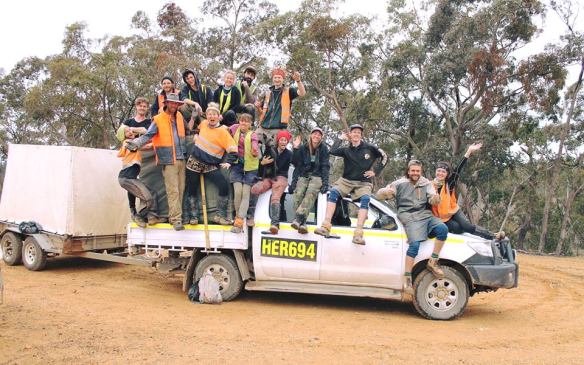 My awesome and nutty crew

Oddly enough, it sometimes felt like I was back at home in Canada working in the cold and drizzly weather planting pine trees  Then, I would take my eyes off of the ground for a few seconds, see a kangaroo, gum trees and I would suddenly remember where I was.

Oh yeah, and I worked in one of the few places in Australia where it snows in the winter (Oberon).

Playing in the snow… 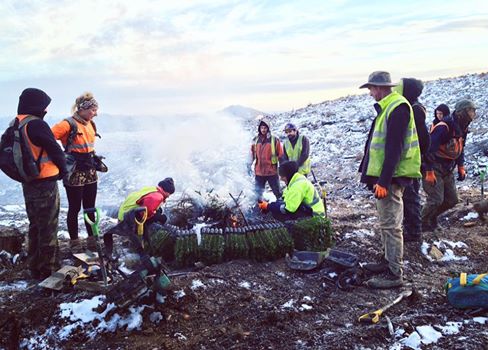 …and working in the snow. Thawing out the frozen seedlings around a fire. Photo by Kively Kohv

Nine weeks later I finished my 7th planting season and had a flight booked to Perth where I would begin a new adventure with the amazing Dan, the Self-Propelling Particle. He left England in January 2015 and has since then cycled over 30,000km in Europe and Asia.

Two weeks of sweet lingering turned into a month. We were lucky to be house sitting for our awesome hosts Ruth and Victor in North Beach for a few weeks while they were off on a camping adventure. I first met Victor in Bangkok in March, where he was beginning his cycling adventure in Thailand and Burma.

From left: Victor, Ruth, Dan and me in North Beach, Perth

It would be a while before we would be seeing the ocean again. Perth. Photo by Dan Calverley

After almost four months off I was ready to cycle again. Our plan is to ride all the way to Brisbane for Christmas to meet with my dear friends Marianne and Heidi. There they will begin their 1.5 year journey home to Denmark. Dan and I have an ambitious 7000km to cover and we won’t be taking the most direct route. The plan is to leave Perth and chase the red dirt along the remote Great Central Road through to Uluru (Ayer’s Rock) in Australia’s red centre. From there, we will head towards Alice Springs and then down the Oodnadatta Track to Adelaide. The route from there is currently unknown.  Soon, it will just be the two of us amongst the red earth, snakes, camels, kangaroos, sand and flies…and maybe the odd curious dingo. Of course, throw in the odd road train and grey nomads passing in caravans.

So this is the account of the first section of the ride: Perth to Kalgoorlie. We are still clinging onto the tiny outposts of civilization before they soon disappear in the desert.

Along the Rail Heritage Trail in John Forrest National Park

About 30 km outside of Perth we joined the Railway Heritage trail, where Dan had his first kangaroo sighting. 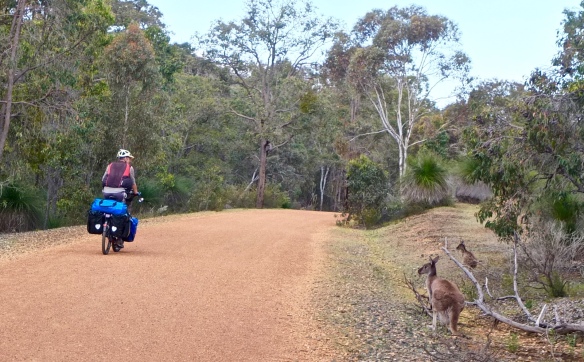 Along the route we also had a few curious birds: galahs, cockatoos and a particular bold Australian ringneck that hung around our first campsite just outside of Chidlow.

The nosey Australian ringneck that hung around our camp. He practically dive bombed my head.

Stealth camping on a MTB trail near Chidlow

And what about scary snakes and spiders? None yet – well, a dead snake (but a desert death adder nonetheless!)  and then a few bobtail skinks crossing the road with stubby tails and dark blue tongues that they stuck out at us as we passed. 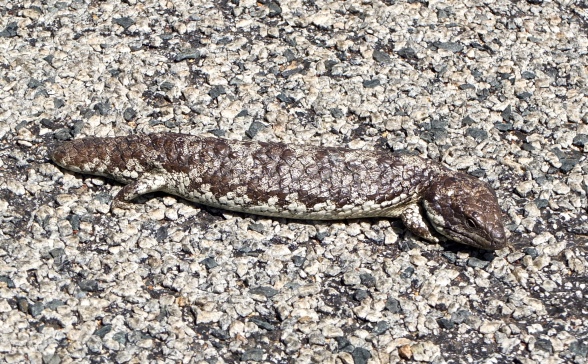 After Chidlow, we briefly made an appearance on the Great Eastern Highway to Baker’s Hill, a small settlement with a bakery very famous for their pies. Small baked pies, usually stuffed with meat and/or vegetables are a widespread Australian tradition. They were absolutely delicious and for a moment I fantasized encountering pie shops like this every 50km all the way to Sydney.

Me stuffing my face. Photo by Dan Calverley

Avoiding the highway once again, we headed Northeast into the wheat belt, using a mix of paved and dirt roads that we mainly had to ourselves. Expansive green farmers’ fields and patches of wildflowers surrounded us. We are lucky to be travelling in the right season to be catching even the smallest glimpses of these piercingly blue, pink and yellow hues dotting the road sides.

Some of the green was also covered in blankets of canola flowers.

Every 40km or so we would pass through small towns, spoiling ourselves with the odd coffee or baked treat. With a screaming tailwind most of the time, traffic-free roads and monotonous, yet pleasant scenery it was an enjoyable ride.

Big skies along the wheat belt 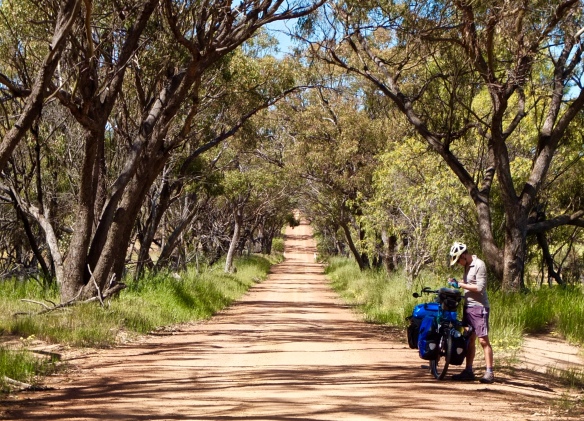 Night time unfortunately brought in hordes of mosquitoes, which we hadn’t quite expected.

Camping was a bit tricky in this area because of the endless fence lines. One night we pulled into a ramshackle looking farmstead, hoping to find someone to give us permission to camp on their land. The place looked abandoned with only the presence of a lonely cow to give us the impression that someone still had an interest in the place. We decided to pitch camp anyway, hoping that an angry farmer wouldn’t run us off the next day. As we were packing up the next morning, we were visited by a friendly guy who worked for the landowner that didn’t seem to have an issue with us being there.

Farm camping amongst the mosquito hordes

Once the fences disappeared, we could pretty much camp wherever we wanted, undisturbed. This is the beauty of travelling in a country with a low population density.

Sunset view from our camp near the edge of a field

Viewpoint from our campsite at Marshall Rocks 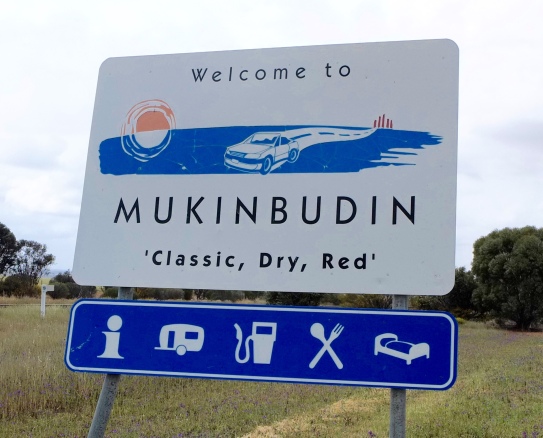 and the more eccentric..

We did end up talking to one guy, but apparently it wasn’t Lenny

Leaving Bullfinch and failing to find Lenny we took a backroad toward the railway line beginning at Koolyanobbing, where we had planned to follow a maintenance track. By this time, we had many little stalkers of our own – mini hordes of bush flies that clung to our backs for the free ride. Luckily, they were only the swarming kind and not the biting kind.

Dan had pointed out earlier the potential issue of accessing the railway line from this side, thinking that we may be blocked in by a fence or gate. I assured him that it would be OK and we would find a way in somewhere. But at that moment it didn’t occur to me that we would arrive on the wrong side of the tracks. Oops. But, no problem Dan concurred, we will find a low point in the fence and carry everything across. Problem solved! 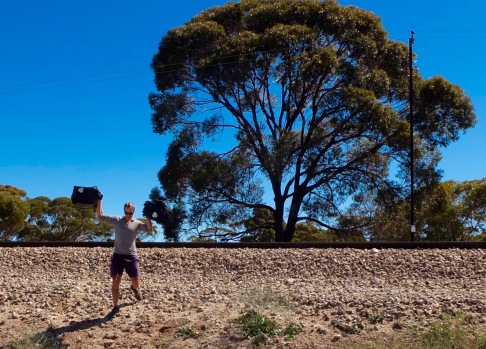 Running the bags and bikes over the railway tracks

Along the road we came across a few signs that said “No access unless authorized by Westnet Rail,” which we obviously ignored. You would think that if they really wanted to keep people out there would be some kind of gate and not just a small sign?

The majority of the track was a decent surface that occasionally deteriorated into rocky and sandy bits. The odd train and truck roared past and we exchanged waves, acting like we had every right to be there. We also spotted kangaroos and a family of emus – seven chicks in total. The emu is the world’s second largest bird and found only in Australia. The young ones from a distance looked to be easily over 1m tall! 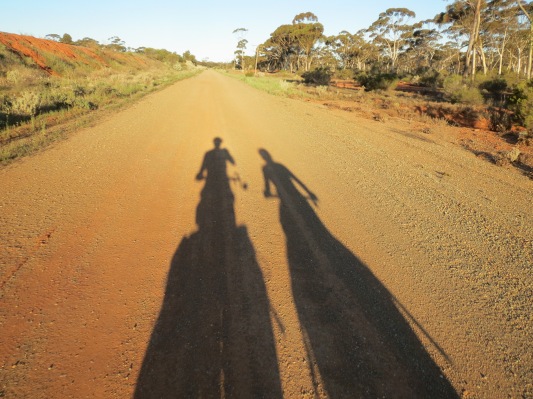 Chilly nights brought relief from the flies and we pulled our bikes away from railway and into the bush to camp. When we got into lower vegetation the night sky felt massive – millions of stars encircling us like a dome. The nights carried on in silence until it was suddenly broken by the thunder of a passing locomotive.

On the final day to Kalgoorlie the flies grew in intensity and the road became a rocky mess. The buzzing menaces won this time and we left the track behind, heading south to the highway for the final smooth stretch into town. It didn’t take long for us to be sucked into a pub with a cold pint in hand. It felt good to be back on the road, to reap the rewards of these small luxuries once again.

Kalgoorlie is a gold mining town famous for its Super Pit – an open cut gold mine that is 3.5 kilometres long, 1.5 kilometres wide and 570 metres deep.

Kalgoorlie’s Super Pit (about one half of it) 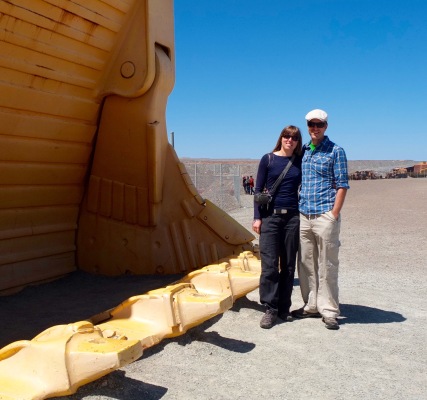 …and some of the massive bits of machinery used

After a few days rest with our awesome host Bev it is time to leave civilization again. We are heading North to Leonara and then East to the start of the Great Central Road in Laverton. Red earth, emptiness, sand, flies, nothingness – here we come. 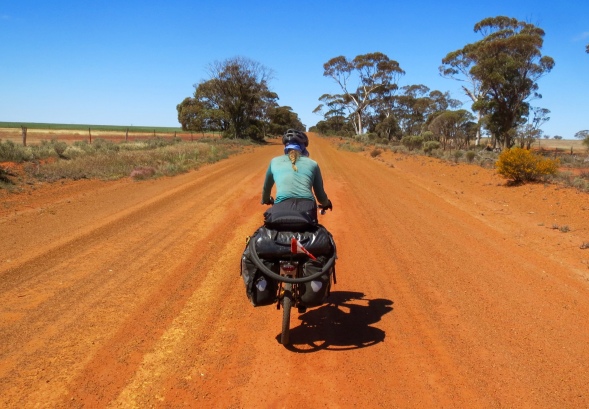 6 thoughts on “Australia Part I: Love Down Under”